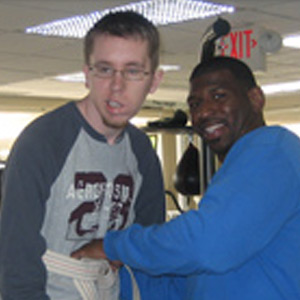 There is a young man, Brad Ebenhoeh, who has been getting PT and OT at The Recovery Project, two hours per day, twice a week, for several months following a traumatic brain injury – something along the line of a bursting brain tumor. He was a student at U of M in advanced sciences, and by all accounts he is a brilliant young man. He is paralyzed and did not talk much when he came to us. With speech therapy and use of a computerized touch screen, he is able to communicate. I have talked to his PT regarding his progress – he feels he has made significant progress, lacking strength and stamina but able to assist in transfers, and Brad is regaining some physical functionality. He feels he will regress without some physical regimen. His progress with OT is even more substantial. He is extremely hard working and doesn’t miss an appointment; I’ve not seen many clients as universally loved by our staff.

We just learned that his past six months and all future therapy costs are rejected and terminated. He is scheduled for discharge this Friday. His family is distraught. I remember being in inpatient rehab and being notified that my anticipated three-week discharge date had been rescheduled for three days hence because of insurance. Mary and I were not ready, and I cannot describe the desolation I felt. We were fortunate enough to fight and prevail, but I never forgot the feeling. A few months later, at outpatient therapy with Polly, I witnessed a young man being told of an immediate discharge due to cessation of insurance reimbursement – the first discussion of any kind, regarding discharge. I knew he and his family were in for a devastatingly sad night, weekend, month, etc., and felt helpless. It was at that moment, I knew where our charitable efforts needed to be directed. Within a few weeks, Mary and I made donations to RIM and U of M, designated for short term continuation of therapy, in instances of abrupt discharge, to at least give the family a few weeks to come up with a plan. That, of course, led us to the common cause we now share.

The Board of Directors unanimously approved the grant and it was awarded May 6, 2008, to cover one hour with a trainer and one hour with an OT, twice a week, for a period of two months while the family sorts this out.