I can’t speak for others, but when I suffered a spinal cord injury while vacationing with my wife Mary, I believed hard work through intensive physical therapy was the only way to regain my life, and thus made it my only priority. I made some quick progress and was standing within a few weeks in inpatient rehab.

We were told I would have 13 weeks of inpatient therapy, and then one day we were notified that my anticipated three-week discharge date had been rescheduled for three days hence because of insurance. Mary and I were not ready, and I cannot describe the desolation I felt. We were fortunate enough to fight and prevail, but I never forgot the feeling.

A few months later, at outpatient therapy, I witnessed a young man being told of an immediate discharge due to cessation of insurance reimbursement – the first discussion of any kind, regarding discharge. I knew he and his family were in for a devastatingly sad night, weekend, month, etc., and felt helpless. It was at that moment, I knew where our charitable efforts needed to be directed. Within a few weeks, Mary and I made donations to the Rehabilitation Institute of Michigan and the University of Michigan, designated for short term continuation of therapy, in instances of abrupt discharge, to at least give the family a few weeks to come up with a plan. That, of course, led us to the common cause we now share.

In 2005, along with Physical Therapist Polly Swingle, we started The Mary and Charles A. Parkhill Foundation for Spinal Cord Rehabilitation. 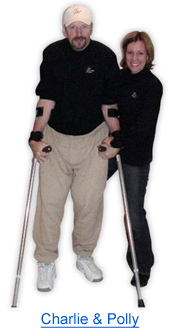